Powerball – a Chance for Winning Millions Is Coming! 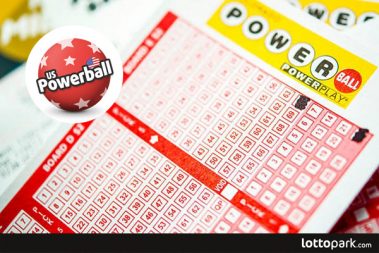 Powerball is probably the most widely known numeric lottery in the world which attracts players with its rollovers. It has existed since 1996 and is now available in 45 states of America. It is featured with simple game rules which haven’t been changed throughout the years. Due to the possibility of playing the game online, you can also take part in this incredible numeric lottery.
You will learn the rules of the game on LottoPark, purchase a ticket and pick the necessary amount of lotto numbers. You will also fight for the winnings which are the same as the winnings for the players playing Powerball in a traditional way. How can you play Powerball?

Winnings on Powerball – What Sums Can You Count on?

The Powerball prize pools are the biggest in the world. The minimum first-tier winning which has a guaranteed value is $40 million. Yet, Powerball rollovers are what evokes public interest most of all. The drawing dated back to January 13, 2016 came to the history of numeric games since the first-tier prize pool overcame $1,5 billion! Then, this gigantic sum of money was divided among three lucky players.

There were also many rollovers below $1,5 billion. What have the latest Powerball rollovers looked like? The first spectacular one was a rollover dated back to August 23 which has already been mentioned and the second one was a bit smaller rollover which took place on September 16, 2017 when the prize pool came up to $130 million. None of the players has won the first-tier winning on Powerball since then. What is the effect? An approximated amount of winning in today’s drawing is more than PLN 500 million! You can also fight for such a gigantic sum which is impossible to win in any lottery of Polish Lotto. What do you need to do?

A Powerball Winning? Only with LottoPark!

If you want to fight for huge Powerball winnings in the closest drawing, you can create a player’s account on LottoPark. It will take you just a minute and then you will be able to join the game. You will need to pick 5 main numbers out of 69 numbers and an additional number from 1 to 26 on a Powerball ticket. If you want to increase the winning odds, use a group game. Such lotto syndicates are extremely popular solutions in the world especially during the biggest rollovers. You will need only to make an appointment with a group of acquaintances for purchasing a big number of tickets together and sharing a winning.

A first-tier winning is earmarked for picking all the 6 numbers correctly, a second-tier winning – for picking 5 main numbers. There are 9 categories of winnings altogether. The odds of winning the main prize are: 292 201 338. Fight for millions of dollars in the closest Powerball drawing.