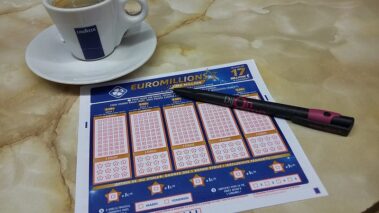 When you get the chance to play EuroMillions online, you should definitely seize it. A lucky ticket holder from France woke up a £184 million richer after winning the EuroMillions jackpot. Yes, you heard that right! It’s actually possible to win the EuroMillions Jackpot. All you have to do is play the game and wait for the results.

It doesn’t take a genius to know that you cannot win this Jackpot if you don’t play it. What’s more, you have to be a constant player to increase your chances of winning. True, the chances of winning this game are quite little, but who knows! Today or tomorrow might be your lucky day. And all the odds are with you, no one can stop you from getting that EuroMillions jackpot.

The numbers that made the French Lotto winner a millionaire are 49, 21, 26, 34, 31 the lucky two are 05 and 02. And that’s how a French citizen took the EuroMillion jackpot home. And do you what that means? The French citizen also became the first single EuroMillionaire to win such a big prize. The lucky lotto winner knocks off the long-standing anonymous ticket winner from Switzerland who claimed £177 Million back in February.

What’s even more interesting is that the winner can now count themselves to be richer than the famous singer Adele whose wealth stands at £130 million, well, at least according to The Sunday Times Rich List.

Additionally, this millionaire can also afford a home in the luxurious estate in London, the Kensington Palace Gardens. The average house price in this area is estimated at £30 million. The British winner was anonymous and his winnings was £170 million back in 2019. The British held the title for a while until now. So far, there have been five UK jackpot winners that also includes an anonymous one in April and June both claiming £122 million and £111 million respectfully.

There’ve only been 1,400 jackpot draws since 2004 with France being the only country seeing the highest number of winners. The country also boasts of over 833 million lucky ticket holders. It’s more of a tradition to play the lottery in France which makes it easy for them to increase their chances of winning over any other country.

The close second to follow France is the UK with at least 700 million winners and Spain holding third place with at least 600 million. Overall, the UK claims close to 22% of all jackpot scoops giving other countries in Europe run for their money. Switzerland back in February had the highest winnings which were valued at £177 million.

However, three months later, France scooped £170 million. The third biggest lottery winnings came from Britain which stands at £170 million but the winner decided to remain anonymous. The second British EuroMillion jackpot winner went to a Scottish couple Colin and Chris Weir back in 2011. They won £161 million and they spent £3.5 million of their money on a mansion and cars. That was only a fraction of their money and they still had a lot more to spare.

Should I play EuroMillions Online?

During this period, you might be lucky enough to walk home with one of the largest winnings of all time from EuroMillions online. So, of course, you should play EuroMillions online. Aside from it being fun, you also stand a chance of becoming the next millionaire simply by making this one decision.

Therefore, instead of waiting for luck to come to you, it’s time you take this opportunity to seize the moment and start your new year with enough money in the bank to secure your future. All it takes is buying one ticket and picking out your lucky numbers. Then the next step is to check EuroMillions results and winning numbers. And that’s it! It might take a few tries before you get the chance to win, but it does help to keep your hopes up.